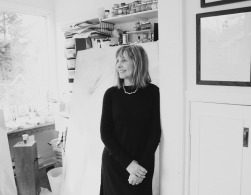 Marie-Andree Allison was born in 1952 in Valleyfield, province of Quebec, Canada. She studied art at the College des Beaux Arts in Montreal, Quebec, from 1971-74. In 1976 she continued her studies in British Columbia, Canada, teaching at and studying with various schools, including the School of Contemporary Art in Victoria, BC. In the early 1980s, Marie-Andree had the privilege of studying the art of Fresco Bueno with internationally renowned artist Professor Dokinanda Sharma from Banastali, India, and was given permission to teach the art form. She then participated in artist seminars at the Victoria School of Contemporary Art, going on to work with and be featured in exhibitions with several of the artists from this core group, including Suzy Raxlen and other Intaglio printmakers.

Between 1982-1992, Marie-Andree was also applying herself to the study of Byzantine Iconography with Princess Eve Galitzine, and was subsequently given charge of the Mother Flaviana School of Iconography in Victoria, BC. She then taught iconography and prepared icons that now reside in an Eastern Orthodox Church as well as in private collections.

In 2004, Marie-Andree was invited to participate in the decoration of St. Sophia Church in Victoria, BC. She was granted travel to Ravenna, Italy, to study the art of Byzantine Mosaic Art, where she learned under the expertise and tutelage of Luciana Notturni at the Scuala Arte del Mosaico. The immersive influence and love for the school brought her back to complete several courses between 2004-2013, including Mural, Floor, and Micro Mosaic, as well as Conservation and Restoration of Contemporary Mosaic. In 2010, she completed a Master Mosaics course in Orsoni, Italy, where she established a close connection with Luca Della Chiesa, who have since been providing the precious material to continue the decoration of St. Sophia.

In 2004, in collaboration with the clergy, Marie-Andree had the privilege of designing and creating the mosaics that now decorate St. Sophia in British Columbia. She was responsible for teaching the art of mosaic to the church community and leading the installation of the mosaic murals that currently decorate the church. The dome of the church was entirely completed in 2012, and has been referred to in one newspaper as “Victoria’s Jewel.” As of 2022, one can view the completion of the entire altar area of the church, which features a smaller reproduction of the Virgin of Torcello in the apse, as well as several scenes taken from mosaics of Serbia, Greece, and Italy.

In 2013, Luciana Notturni introduced Marie-Andree to Marco da Lucas and his atelier in Ravenna, where she experienced a deep emotional connection to the art form and lead to a new understanding of and more playful and creative approach to her mosaic art. Examples of this can be found in her works “Camisa Novella” and “White Wing” (2015), as well as several triptychs and diptychs, such as “Glaciers,” which combines the art of mosaic with encaustics.

From 2019 to the present, Marie-Andree has participated in various virtual art shows, and in 2021, in a mask exhibit in Paray Le Monial with AIMC members. She is the recipient of a Canada Council for the Arts grant to attend the 2022 Congress in Ravenna.

Marie-Andree Allison resides with her family in Victoria, BC, Canada.